Eight famous bridges span the Danube in Budapest linking Buda and Pest. Each bridge has a totally different character and style and each has a fascinating story to tell. These bridges are a vital part of Budapest transport infrastructure and popular tourist attractions at the same time.

The oldest and the most famous bridge in Budapest

Széchenyi Chain Bridge (Széchenyi Lánchíd) was the first permanent bridge in Budapest. It was built between 1838-1849, designed by the Scottish engineer Adam Clark and constructed by William Thierny Clark. This bridge was named after the man who financed it in its original form. He was Count István Széchenyi who wanted to not only unite Buda and Pest, but also to unite the country as well. 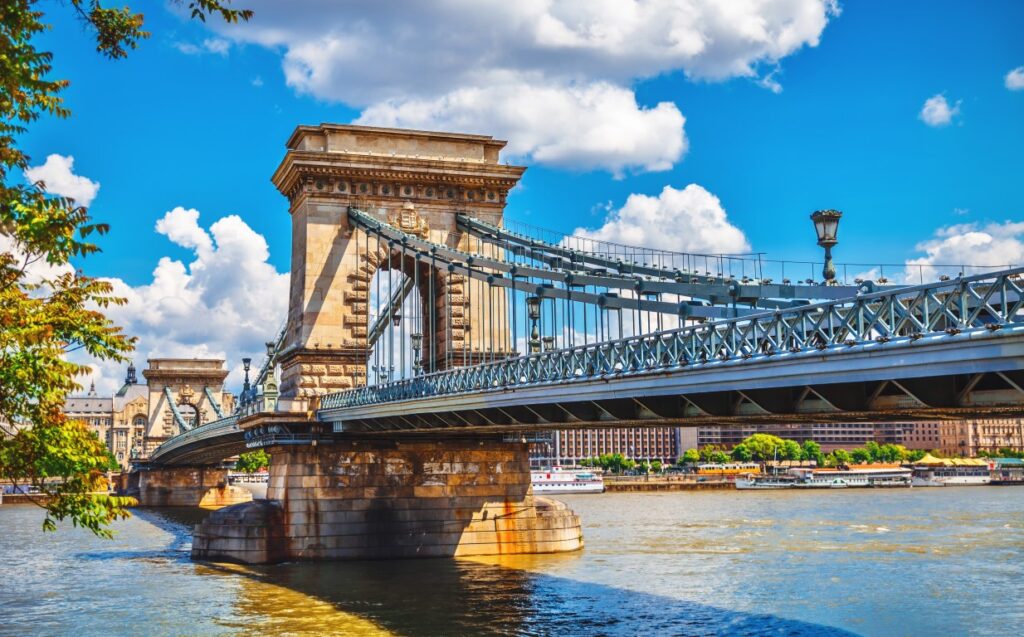 Chain Bridge became the first bridge to connect Pest and Buda sides of the city which at the time were two separate cities. The pairs of the stone lion sculptures sitting at each of the bridgeheads were added in 1852. According to the widespread urban legend these iconic stone lions do not have tongues.

In World War II the bridge was damaged but it was rebuilt and reopened at the end of 1949. It is the oldest, the narrowest and the shortest bridge in Budapest. Széchenyi Chain Bridge is more beautiful at night when thousands of lights are lit up like a chandelier until midnight. 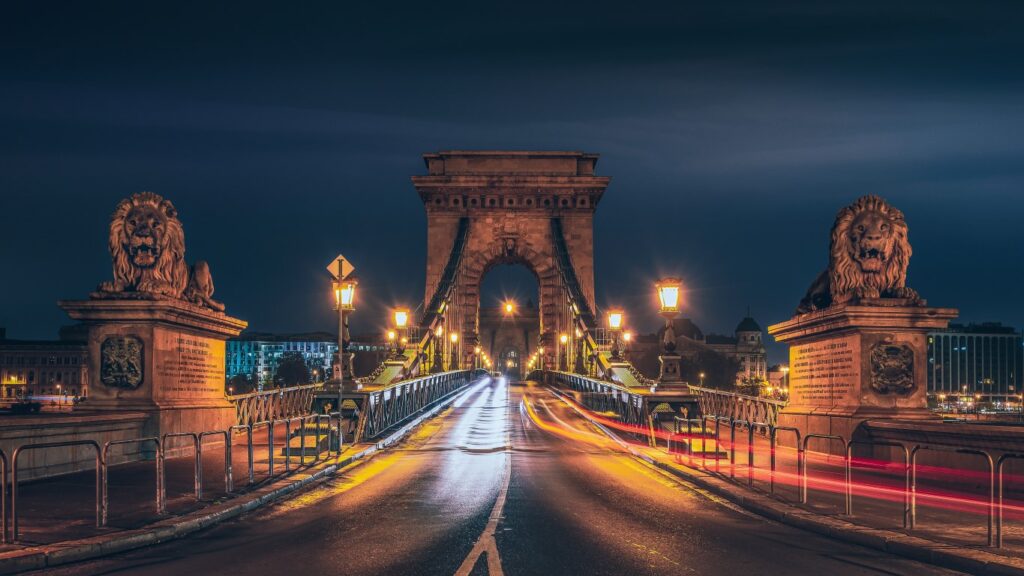 Castle Hill Tunnel (Budai Váralagút), which runs under Castle Hill, was built by Adam Clark, a Scottish engineer, between 1853-1857. The square at the foot of Chain Bridge was named after him. The entrance of the tunnel was built in the same neo-classical style just like Chain Bridge.

It’s not so obvious that the Castle Hill Tunnel has homes in it, in which Chain Bridge’s caretaker has been living for forty years. These apartments have been empty since 2007 waiting for huge renovation make it livable once more. There is a terrace on the top of the tunnel where the view is breathtaking and salsa dancers get together regularly for a street party during the summer.

Fun fact: The tunnel itself is almost exactly the same length as the bridge. So there is an old joke that Castle Hill Tunnel was built so that the Chain Bridge could be placed inside when it rained.

Castle Hill Funicular (Budavári Sikló) links Chain Bridge with Buda Castle. This funicular railway line was opened in 1870 and at that time Castle Hill Funicular was the second one operating in Europe. During World War II the cars and the terminals were destroyed but it was rebuilt to the original design and reopened in 1986. Two cars are used for carrying passengers, one for each direction. It is a fun way to travel to save your legs a hike to the top of Castle Hill. Where to stay near Chain Bridge

Hotel Clark Budapest is a design boutique hotel located at the foot of Chain Bridge on the Buda side. Honoring the storied stone lions that eternally guard both sides of the Chain Bridge, Hotel Clark is filled with lion-related imagery from the front entrance to the guest rooms. From Leo Rooftop Bar you can overlook the Danube and the Pest cityscape as well. Leo is primarily a bar but you can order high-quality bar food alongside a variety of exciting cocktails and premium spirits.

Lánchíd 19 Design Hotel is a multi-award winning design hotel located at the banks of the Danube on the Buda side of the city. The facade of the hotel is animated by the changing colors of an innovative lighting design concept, so you will not miss the way. The hotel rooms provide a splendid view over the Royal Castle or the Danube River and the city. The panorama suites on the top floor have jacuzzi bathtubs and large terraces overlooking the river and the whole city.

Four Seasons Hotel Gresham Palace overlooks Chain Bridge across the prominent Széchenyi István tér on the Pest side. The building is an outstanding example of Central European Art Nouveau, which originally were built for luxury apartments. In 2001 the building was transformed it into a luxury hotel by the Canadian high-end chain Four Seasons. In the hotel you can find a top-floor spa, an elegant cocktail bar and the famous top-notch restaurant, Kollázs Brasserie & Bar.

Prestige Hotel Budapest occupies a completely refurbished neo-Classical building in the neightborhood of Chain Bridge on the Pest side. The historic façade is primarily restored to highlight the original beauty of this urban palace, while the interior design is an elegant marriage between classic elegance and contemporary flair. You can enjoy breakfast, lunch, and dinner at the in-house Costes Downtown, the sister eatery to Hungary’s first Michelin-starred restaurant.

Urban Stable Luxury Apartments, just a stone’s throw away from Chain Bridge on the Pest side, is ideal for couples who are planning to come for a weekend get-away. The apartment come with a TV and a private bathroom with shower and a hairdryer, while the kitchen features a microwave, a fridge and a stovetop.