Paris Department Store (Párisi Nagy Áruház) is located at 39 Andrássy Avenue in the heart of Budapest. This breathtaking avenue is mainly defined by stylish café-bars, premium and luxury retailers. Just like the avenue, Paris Department Store also holds a long history. It was built in 1882 based on the designs by Gusztáv Petschancher. Its facade facing Andrássy Avenue was designed in Art Nouveau style, while its side looking at Paulay Ede Street is Neo-Renaissance. During the constructions of Andrássy Avenue, the site was bought by Casino Building of Budapest plc. from the Council of Public Works in 1884. In the three-storied Neo-Renaissance building the ground floor was marked by columns holding the vaulted hall, which was the site for the famous alehouse and restaurant owned by József Petanovits. The breathtaking ballroom was located in the wing facing Paulay Ede Street. The paintings were works of the artist Károly Lotz, while some of the frescos were made by Árpád Feszty. The building with prestigious former glory provided a remarkable scene for balls and other events of Terézvárosi Casino until 1909. The first reconstruction of the building took place in 1909 when the new owner, Sámuel Goldberger, whose store of the same name (Párisi Nagy Áruház) had been destroyed in a fire in 1903, decided to have his renewed store in the current building of Paris Department Store. Goldberger hired the same constructor, Gusztáv Petschancher for organizing the reconstruction work. The design of the new building was based on the architecture of the French department store Bon Marché which was opened in Paris in 1869. So this how the word “Paris” got into the name of the store. The first modern department store of Hungary opened its doors on March 3, 1911 and soon became one of the most prestigious retail outlets of the era. The characteristics of the building were the five-story high indoor glass yard and the glass-walled elevators with mirrors. There was a walkway built on the roof where you could also skate in winter. The rooftop restaurant could host 400 persons and offered a lovely view of the hills of Buda. There was no doubt that Goldberger brought the world standards to Budapest by this store.

After World War I the economic crisis disrupted the retail sector. By 1923 Paris Department Store almost went bankrupt, so Goldberger transformed the family business into a corporation. He became the major shareholder, but each department was rented by individual tenants. The unified image of the departments disappeared and due to its bazaar-look-a-like, it became the capital’s cheapest shopping place. However, the turnover of the institution still has flourished and become profitable.

The majority of the Goldberger family fled the country before the German occupation in 1944. Fortunately the building was not damaged in World War II, but following the nationalization, contrary to its original purpose, it was used as a storage place of the State Book Distribution Company (Állami Könyvterjesztő Vállalat). It was re-opened in 1957 under the name of Fashion Hall (Divatcsarnok) and it had been operating as a member of the chain store called Central Stores (Centrum Áruházak) until 1999, when it was closed. The most important reconstruction work was that in 1963-64 the interior space of the department store was elevated by adding an extra level. The building has been under historic preservation since 1967. From 2001 to 2005 it was managed by the Hungarian National Asset Management Inc. when the ORCO Property Group bought it from the state in 2006 and obtained permission for the reconstruction in 2007. During the reconstruction it was an issue who would move to the most elegant building of Andrássy Avenue. 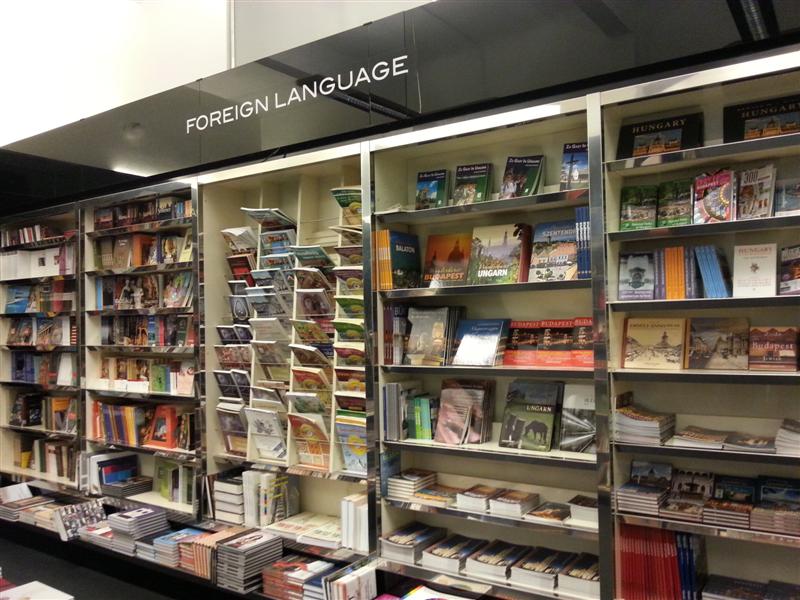 Its first tenant has been Alexandra Bookstore since November 10, 2009. It won the Year’s Metropolitan Bookshop prize in 2011. Here you can browse among books on two floors plus there’s a wine-section on the ground floor which can serve as a lovely distraction from book shopping. Lotz Hall, the former ballroom of the building was restored to its original condition during the reconstructions of 2009 and serves as the home of the elegant Book Café. The frescos, the enormous mirrors and the wooden inlays give a special shine to the neo-renaissance ambience of this café. I couldn’t wish for a more authentic journey back in time to the last century’s Budapest. Book Café is more than just a coffee and cake place. To make your day unique bring your favorite book upstairs from the bookstore and enjoy some quiet moments while sipping your coffee specialty. Every day from 4 p.m. to 8 p.m. you can enjoy listening to live piano music. Just lean back and let yourself be enchanted by the music while having a piece of cake in the relaxed comfort of this truly majestic environment. If you like the trendy combination of bookstore with a coffee shop, this is your place. And this is my place too. I always bring my foreign friends here to enjoy the historical atmosphere of this café. 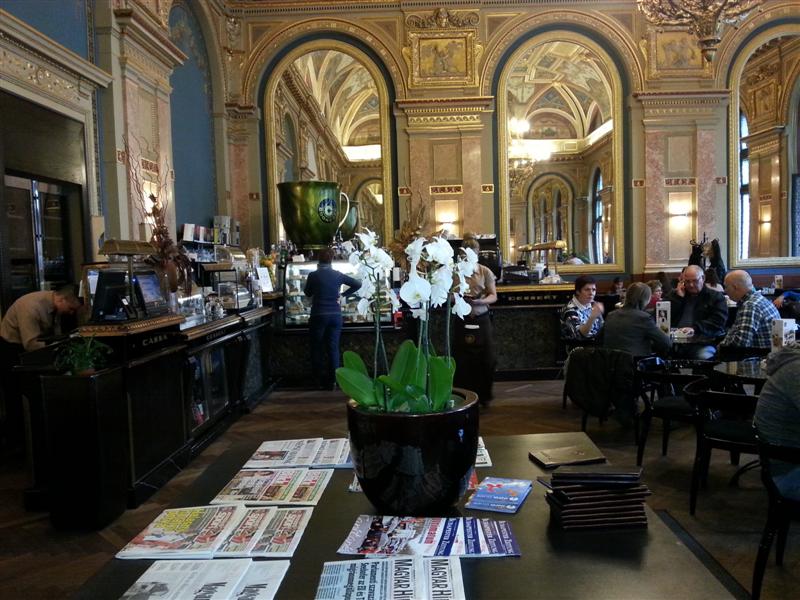 If you want to drink a cocktail in the afternoon you are also in the right place. One of the city’s best drinking spots is located high in the air, on the rooftop of Paris Department Store. When you walk into the right wing of the building on Andrássy Avenue, take the elevator and in no minute you’ll be greeted by the jaw-dropping 360 degree panorama view and have Budapest at your feet. So you can’t miss getting a drink here. Just sit back on the terrace, sip on a glass of wine or cocktail while chilling to down-tempo tunes played by a DJ that matches the sunshine, sunset or getting started mood… Check out my next blog entry for more details of 360Bar.

Update: Alexandra Bookstore was closed down in March 2017, but Book Café has been reopened under a new name: Café Párisi since December 2018.