Exploring the Castle District I.

The Castle District is the oldest part of Budapest. Its landmarks have earned the UNESCO World Heritage status and are very popular among instagrammers. Those cobblestone streets and leafy promenades together with the key attractions make this area ranking high on visitors’ lists.

I live relatively close to the Castle District of Budapest, often climb up the Castle Hill and take photos of its beauties. So when you check my instagram story and feed you will find lots of photos and videos of Matthias Church, Fisherman Bastion, Royal Palace etc. I like walking around and discovering every single corner of this area.

What to see in this beautiful, historic part of the city

When you come from the Pest side you should cross Chain Bridge to get to the Castle Hill Funicular (Budavári Sikló) which takes you up to the Royal Palace. The Funicular links Adam Clark Square and the Széchenyi Chain Bridge at river level with Buda Castle above. As part of the Danube riverfront, it’s also a World Heritage Site.

The construction work began in 1868, under the direction of Count Ödön Széchenyi, son of the ‘Greatest Hungarian’ István, who conceived of the Chain Bridge. The line was opened in 1870. At that time this Funicular was the second one in Europe.

During World War II the cars and the terminals were destroyed. It was rebuilt to the original design and reopened in 1986. Two cars are used for carrying passengers to the Royal Palace, one for each direction. From the top there is an amazing view to the city.

In 2020, the Funicular is celebrating its 150th birthday! Happy Birthday!

Buda Castle (Budavári Palota) is the historical castle and palace complex of the Hungarian kings in Budapest. It was built in the middle of the 13th century, originally in Romanesque style, but later on rebuilt and enlarged in Gothic style.

During the Turkish occupation the palace was not used but damaged, and after the withdrawal of the Turks the whole palace was in ruins.

When the Habsburgs came in, they decided to build their new royal palace here on the top of the ruins. This one is never served as a royal palace, no kings or queens lived here since the end of the 17th century.

The medieval walls and a couple of buildings are still remained from that period, but in the 19th century the palace has undergone major transformation, led by Miklós Ybl and Alajos Hauszmann. It has become a magnificent neo-baroque castle with thrilling interiors and majestic features. 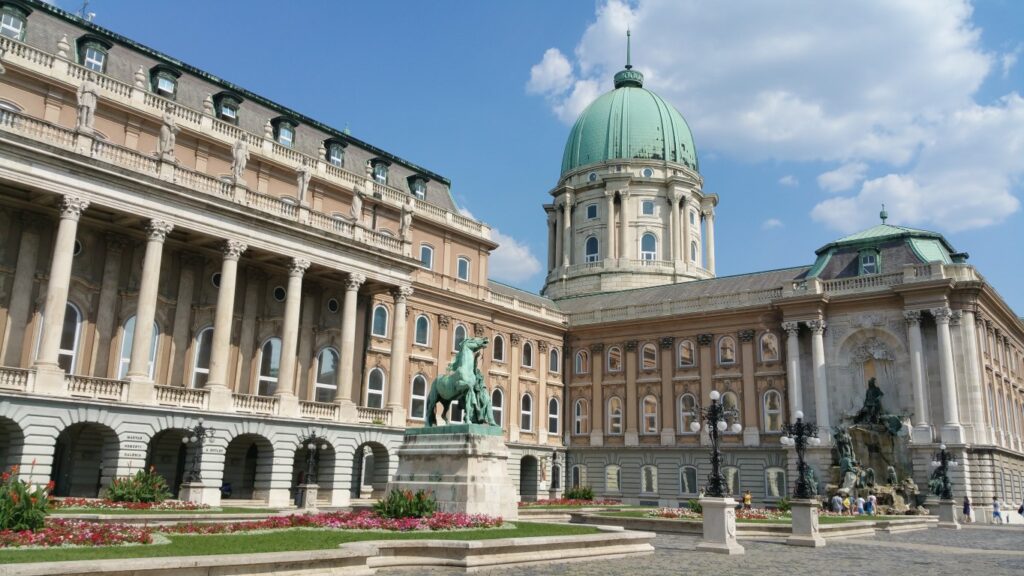 Unfortunately most of the building has been demolished in World War II. The palace was rebuilt in the 1960s, but with serious simplifications on the exterior. The interior rooms and halls were not reconstructed at all.

A series of renovation projects started in 2019 targeting roads, public spaces, parks, the castle walls, and its gardens. Today the building functions as a complex, modern cultural institution. It hosts the Hungarian National Gallery, the National Széchenyi Library and the Budapest History Museum.

Hungarian National Gallery (Magyar Nemzeti Galéria) is the largest public collection documenting and presenting the rise and development of fine arts in Hungary. It has been operating as an independent institution since 1957. It was housed in the former Royal Supreme Court in Kossuth Square.

The Gallery moved to its present location, in wings B, C and D of the former Royal Palace, in 1975. The Gallery can boast of 70,000 painting, sculptures and graphics. Serving as a storehouse of knowledge, National Széchényi Library is an institution storing and making publicly available traditional (paper-based) and modern (electronic) library documents of the Hungarian cultural heritage.

Visit its website and browse among thousands of books, journals and CDs. The building of the library is worth visiting, too!

Budapest History Museum (Budapest Történeti Múzeum) is also referred to as the Castle Museum, since it is tucked in the back courtyard behind the Royal Palace. It deals with the cultural heritage of Budapest and Hungary, the material remains of the period between the liberation of Buda from the Turks and the beginning of the twentieth century.

In its picture gallery you will find a collection of old prints depicting Pest, Buda and Óbuda, examples of decorative art rescued from old buildings, as well as paintings, sculpture and drawings of all periods.

Do not miss the courtyard garden. It has amazing views and there are benches to sit and relax with refreshments. Check the website of the museum for guided tours.

Changing Of The Guards Ceremony

Odds are that, while wandering the Castle District, you’ll likely catch sight of the Changing of the Guards ceremony. During daytime, it’s held every hour in front of the presidential Sándor Palace. Unlike the pomp of, say, Buckingham Palace, this ceremony happens within feet of local visitors, who can trail after the nattily dressed troops as they circle the grounds and salute with their immaculate choreography.

Where to stay in the Castle District

Hotel Castle Garden was opened in December 2008.  The hotel offers elegant rooms and high degree hospitality in a peaceful environment. In the garden of the hotel, you can relax in the arms of nature, or recharge with energy in the spa section. The buffet breakfast is served by the hotel’s own restaurant, the famous Ristorante Riso, which has its own terrace.

Baltazár Boutique Hotel is a family-owned boutique hotel, grill restaurant and wine bar in one. Its terrace is perfect for your morning coffee, and its open kitchen conjures up top-quality meat dishes. The wine list showcases nearly 300 options. The interior of the rooms and suites is harmonizing with the design and mood of the bar.

Budapest’s historic Pest-Buda inn, which was opened in 1696, is now a deluxe boutique hotel. Pest-Buda Design Hotel is located in the historical Fortuna utca. In this building Pest-Buda Restaurant has been operating for more than 50 years when it went through a modernization and turned into a bistro and hotel all under one roof.