Looking down over the Danube and across Pest, Castle Hill tops every guidebook’s list of “must-see sights” of Budapest. Buda Castle, that houses Hungarian National Gallery, the National Széchenyi Library and the Budapest History Museum, might be the city’s crowning jewel, but there are so much more to discover. Like Matthias Church and Fisherman’s Bastion.

Matthias Church (Mátyás Templom) is the symbol of Buda Castle, located at the heart of this quarter. Officially known as the Church of Our Lady but named after the much-loved 15th century Renaissance king, King Matthias, who got married twice here.

It was originally built in Romanesque style in the 13th century, but unfortunately, there is not too much left. If you enter here today and look around your first impression is probably that this is a Gothic church because whenever it has been enlarged or rebuilt it always happened in Gothic style.

During the Turkish invasion it became the city’s main mosque and all its frescoes and medieval furnishings were destroyed. When the Turks were expelled, the church was given to the Franciscans and later to the Jesuits.

In the second half of the 19th century Matthias Church was rebuilt and restored to its original splendor in neo-Gothic style by architect Frigyes Schulek. Don’t get lost during wandering from Loreto Chapel through St. Imre Chapel to St. Stephen Chapel in the crypt. Rent an audio guide instead.

Throughout the centuries, Matthias Church has remained a preferred site for celebratory events, such as royal weddings and coronation ceremonies. Nowadays, many concerts take place as Matthias Church has an excellent acoustics. Beside St. Stephen’s Basilica it is a very popular venue amongst wedding couples tying the knot here.

Fisherman’s Bastion (Halászbástya) was built between 1895 and 1902 for the celebration of the thousand year anniversary of the settlement of the Hungarians. It was designed by Frigyes Schulek in neo-Gothic and neo-Romanesque style.

The architect wanted to frame the tower of Matthias Church with the smaller tower of the bastion in order to express that the ancestors lived in these strange-shaped tents. The seven towers of the Bastion represent the seven Hungarian tribes that settled in the Carpathian Basin in 896.

Local legend states that the Bastion takes its name from the guild of fishermen that was responsible for defending this stretch of the city walls, and the old fish market also sat at this location during medieval times. 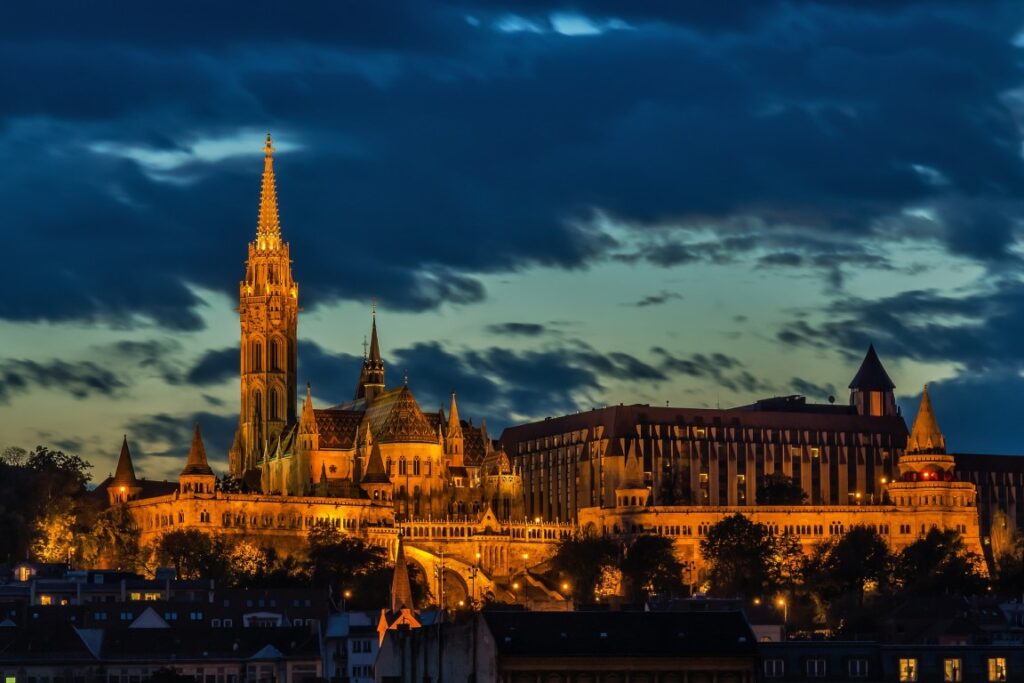 Where to stay in the Castle District

Hotel Castle Garden was opened in December 2008.  The hotel offers elegant rooms and high degree hospitality in a peaceful environment. In the garden of the hotel, you can relax in the arms of nature, or recharge with energy in the spa section. The buffet breakfast is served by the hotel’s own restaurant, the famous Ristorante Riso, which has its own terrace.

Baltazár Boutique Hotel is a family-owned boutique hotel, grill restaurant and wine bar in one. Its terrace is perfect for your morning coffee, and its open kitchen conjures up top-quality meat dishes. The wine list showcases nearly 300 options. The interior of the rooms and suites is harmonizing with the design and mood of the bar.

Budapest’s historic Pest-Buda inn, which was opened in 1696, is now a deluxe boutique hotel. Pest-Buda Design Hotel is located in the historical Fortuna utca. In this building Pest-Buda Restaurant has been operating for more than 50 years when it went through a modernization and turned into a bistro and hotel all under one roof.