Inspiring quotes about Budapest to make you want to visit

Budapest has inspired some truly beautiful travel quotes. The late celebrity chef Anthony Bourdain, having been well prepared for the beauty of Budapest, was nonetheless surprised at its magnificence. “They said that of course, Budapest is beautiful,” he remarked. “But it is in fact almost ludicrously beautiful.”

When you visit the Hungarian capital you will totally agree with it. It’s a city with 19th-century elegance, beautifully blended with baroque, neoclassical and Art Nouveau architecture. Its legendary landmarks seemingly glow in the golden hour.

Good bye February. Thank you for the good times and the days (even the leap day :)) you filled with pleasure. Thank you for fond memories, and for feelings I'll always treasure. So Hello March. I love you because spring is "almost" in the air. 🌺🌼🌸

A post shared by Sissi Carballo|MyLittleHungary (@mylittlehungary) on Mar 1, 2020 at 12:28pm PST

The city is separated by the Danube River: Buda and Pest form the two different faces of the Hungarian capital. Buda’s hills offer sweeping panoramas across the city and the Castle District purrs with imperial taste. Pest is entirely flat and its buzzing nightlife and bar scene are always lively.

“I love Budapest for all the right reasons – architecture (especially art nouveau), romance (particularly the views from the bridges) and sticky apricot jam – and some of the wrong ones, too – killer pálinka (fruit brandy), rickety trolleybuses, and spending way too much time in the Turkish baths.” -Steve Fallon

Going through photos from last year when #springhassprung 🌸🌼🌺 It is the prettiest time in Budapest. I love taking long walks… This year we stay home instead… #sakura🌸

A post shared by Sissi Carballo|MyLittleHungary (@mylittlehungary) on Mar 27, 2020 at 12:13pm PDT

“Europe’s most underrated big city, Budapest can be as challenging as it is enchanting.” – Rick Steves

“Budapest is a prime site for dreams: the East’s exuberant vision of the West, the West’s uneasy hallucination of the East. It is a dreamed-up city; a city almost completely faked; a city invented out of other cities, out of Paris by way of Vienna — the imitation, as Claudio Magris has it, of an imitation. – M. John Harrison

Here is a photo of a coronavirus free time: beautiful sunset at Margaret Bridge

A post shared by Sissi Carballo|MyLittleHungary (@mylittlehungary) on Mar 23, 2020 at 1:31pm PDT

“Budapest in late May is a city of lilacs. The sweet, languid, rather sleepy smell of lilacs wafts everywhere. And it is a city of lovers, many of them quite middle-aged. Walking with their arms around each other, embracing and kissing on park benches. A sensuousness very much bound up (it seems to me) with the heady ubiquitous smell of lilacs.” – Joyce Carol Oates

“But best of all I loved the Castle Hill District of Buda. I never tired of its ancient streets. Even in those days old things attracted me more than new ones. For me the deepest truth was found only in things suffused with the lives of many generations, which hold the past as permanently as mason Kelemen’s wife buried in the high tower of Deva.” – Antal Szerb

As we look into the future, it’s as far as we can see. So let’s make each tomorrow be the best that it can be. 🤩 The future belongs to those who believe in the beauty of their dreams. 👇 Follow your dreams 🤗

A post shared by Sissi Carballo|MyLittleHungary (@mylittlehungary) on May 23, 2020 at 6:10am PDT

“In Budapest, you’ll find experiences like nothing else in Europe: Feel your stress ebb away as you soak in hundred-degree water, surrounded by opulent Baroque domes…and by Speedo- and bikini-clad Hungarians. Ogle some of Europe’s most richly decorated interiors, which echo a proud little nation’s bygone glory days.” – Rick Steves

“One thing that hasn’t changed through the years is the Hungarian affection for taking the waters — marinating in thermal baths. A tradition going back to the Romans, continued by the Ottomans, and something that survived through two wars and communism. And they do it in style.” – Anthony Bourdain

A post shared by Sissi Carballo|MyLittleHungary (@mylittlehungary) on May 8, 2018 at 7:50am PDT

“Of course it’s not all foie gras and fine wines. There are other pleasures, just as awesome. Maybe, maybe even more awesome.” – Anthony Bourdain

“In Budapest, I always had questions. What is your signature dish? They, of course, said goulash. I loved it so much and now have to figure out a way to make it at home.” Tia Mowry

Click HERE to read my recipe how to make goulash at home. 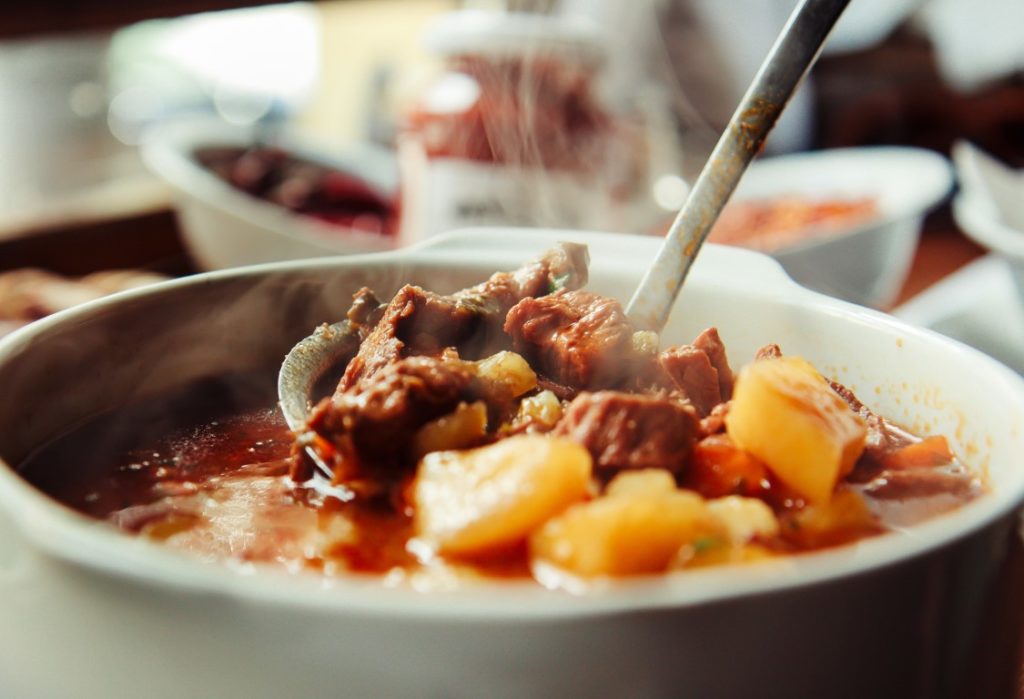