The Hungarian Parliament Building is the most iconic building in Budapest. It is a part of the World Heritage; together with Kossuth Lajos tér (the square in front of the Parliament) it is a major National Memorial Site, the center of Hungarian statehood and constitutionality, as well as the main political venue in Hungary. This beautiful building is visible from almost every point of the Danube as it is located directly on the bank of the river on the Pest side. It is one of the most popular tourist destinations, a sight you can’t miss when you are in Budapest.

It is definitely one of the most Instagrammable spots in Budapest 🙂

According to the Independent British newspaper, the Hungarian Parliament Building is among the top 10 parliament buildings of all the 193 countries of the world. It means that our beloved Parliament building has one of the world’s most beautiful seats of legislative assemblies. As the author says: “This is it. This is the parliament. A legislative building without compare.” Gothic. Tick. Dome. Tick. Red. Tick. He also says it is “unutterably gorgeous inside too”, and I’ll take his word for it.” Hungarian parliamentary assemblies had no permanent home for centuries. According to an international competition in relation to designing the parliament building, the committee decided to build the first three winner buildings on Kossuth Lajos tér. Of course, the winner of the first prize serves as the Parliament. The second one is the Museum of Ethnography and the third one is the Ministry of Agriculture.

Construction work of the Hungarian Parliament started in 1885 and the building was inaugurated on the 1000th anniversary of the establishment of the country in 1896. It was completed in 1904. When designing and constructing the Hungarian Parliament Building, one of the key aspects was that they wanted to use solely Hungarian building materials during the construction. And they did so with only one exception: the 6 meter tall marble-monoliths along the main stairs were sourced from Sweden. 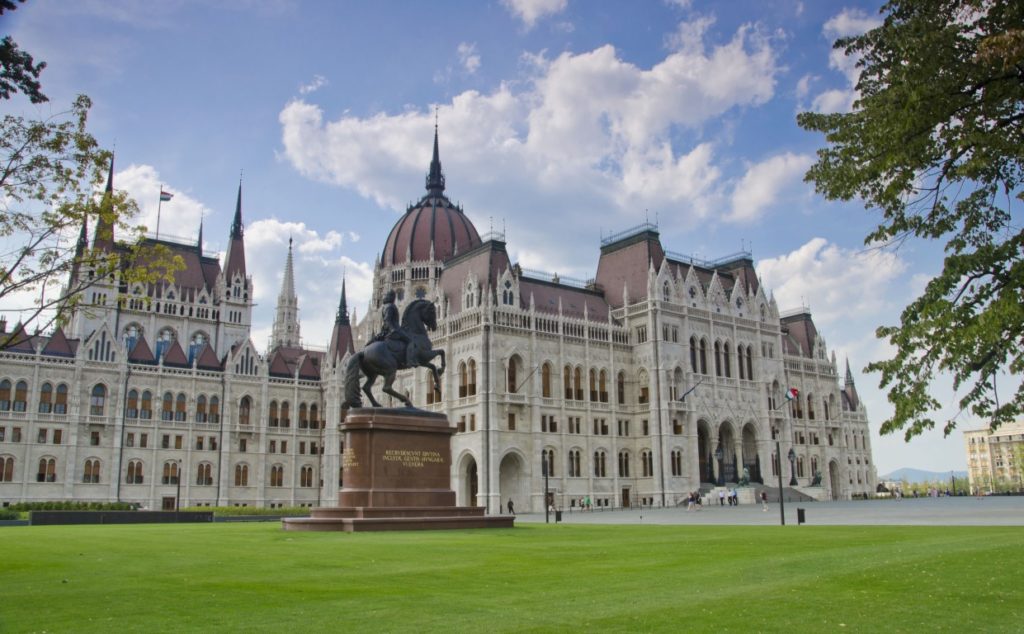 The largest and the tallest building

Every time I walk by the Hungarian Parliament Building, I am mesmerized by the pristine façade of this colossal building, which happens to be the largest and the tallest building in Budapest. The cupola of the Parliament is 96 meters tall and since the building was designed for the millennium – the 1000th anniversary of Hungary – it symbolizes the year of the Hungarian conquest of the Carpathian Basin (896).

The pearl of the building, without a doubt, is the Grand Stairway. This is the nicest, widest and most decorated one. The 96 stairs that dominate the space covered with red carpeting leads from the main entrance to the Dome Hall. It used to be the royal staircase. The red carpet that runs throughout the building is nearly 3 kilometers long. 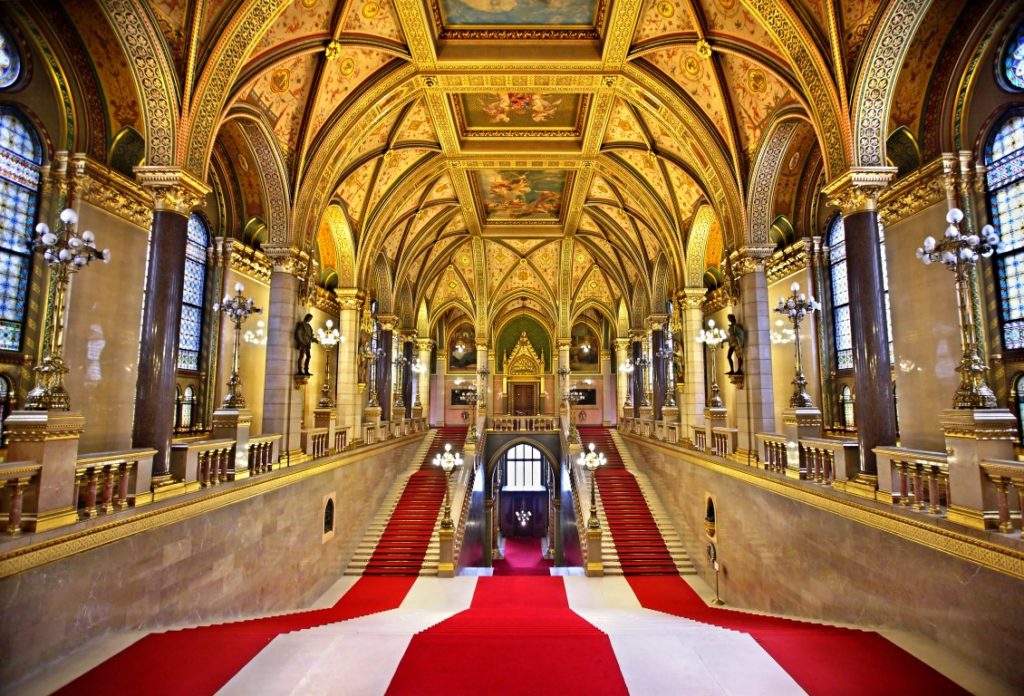 Given as a coronation gift to St. Stephen in the year 1000 by Pope Sylvester II, the Hungarian crown became a prominent Hungarian National Symbol. During World War II, it was quietly smuggled out of Hungary to protect it from the Soviets & Germans. It was secretly stored at the United States Gold Reserve at Fort Knox with the intention of returning it to the Hungarian people one day.

That day was in 1978 when President Jimmy Carter returned it to Hungary. Today, it lies on display in the Hungarian Parliament Building in Budapest. And it will literally take your breath away!

When I saw the lavish interior of the Hungarian Parliament Building, my jaw hit the floor. Even though gold leaf is very light, 40 kilos of 22-23-carat pure gold foil was used for the interior decoration of the building. Plus half a million precious stones beside the 40 million bricks that were used in the building process! 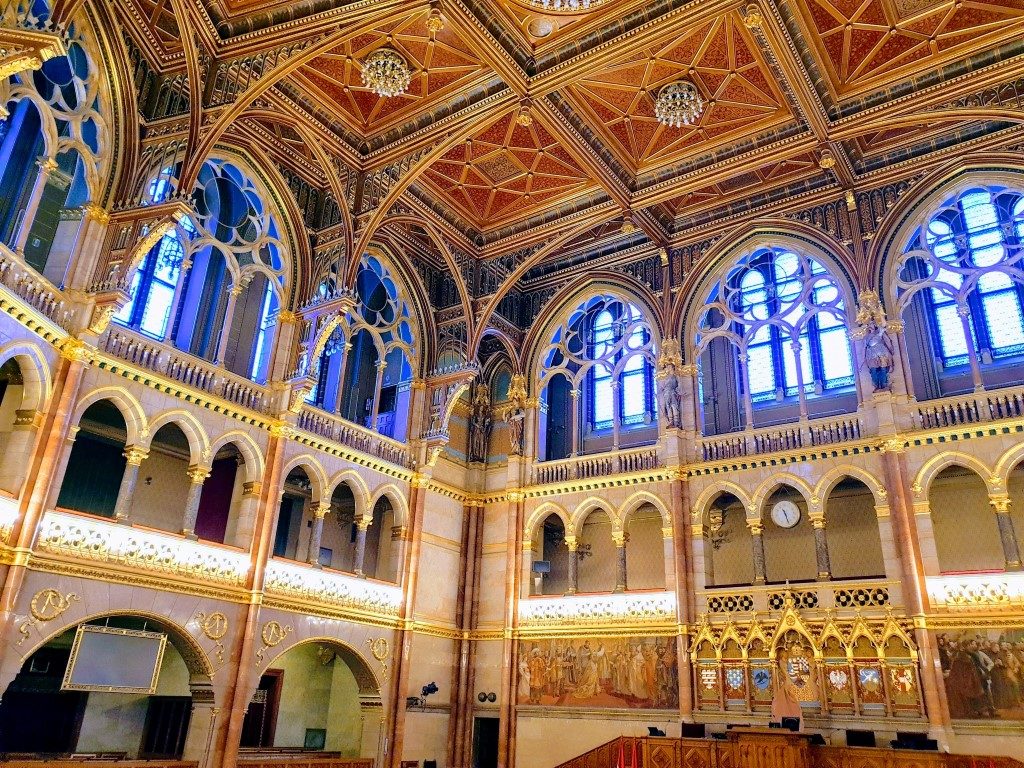 The back door is used

While the front facing façade overlooks the River Danube, nowadays the official main entrance is positioned in Kossuth Lajos tér, which is effectively the back of the building. Politicians also enter the Parliament through this back door. However, the main gate, found downstairs behind red curtains, is used when an important delegate is received for the first time.

Guided tours are available in different languages. All the information you need to know about the Hungarian Parliament Building before visiting it, you can find HERE.

Please check entrance fees, opening hours and visiting rules on the website of Visitor Center of the Parliament.

Where to stay near the Hungarian Parliament Building

Hotel Parlament is a 4-star hotel just a stone’s throw away from the Hungarian Parliament Building and has been welcoming its guests since 2006.  The art-deco style rooms and all public areas have been totally refurbished for the 10th anniversary of the hotel thus offering a friendly atmosphere and unique design. Tasty breakfast with gluten-free options, lounge bar with delicious cocktails and wellness area with a hot tub and a sauna are awaiting its guests.

Hotel President is located at the near vicinity of the National Bank, the Chamber of Commerce, and the US Embassy. Its wellness center is a peaceful oasis, your heaven of relaxation. The panoramic terrace of Hotel President is a touristic hotspot of Budapest. You can enjoy close-up views of the Art Nouveau tiles on the nearby Hungarian State Treasury, and the 96-meter-high Parliament dome. In summer the terrace turns into one of the most exclusive eateries in the city. In winter the rooftop functions as an ice skating rink.

Iberostar Grand Budapest is located in the heart of Budapest where all the capital’s historic sites are at your fingertips. This 5-star hotel is ideal for those who wish to find neoclassical elegance that meets modern luxury and comfort during spending time in Budapest. Its restaurant specializes in Hungarian cuisine, but weaves Spanish-inspired flavors into every dish for a true adventure for the palate.

Boutique Residence Budapest is located in the center of the city, only 50 m from St. Stephen’s Basilica and 701 m from State Opera House. The Hungarian Parliament Building and Chain Bridge are also in walking distance. All the nicely decorated units are fitted with air conditioning, a flat-screen TV with cable channels, a kettle, a shower, free toiletries and a desk. The rooms come with a private bathroom.